Fighting a large enemy force can seem messy and chaotic at first. But if you take time to observe how your enemies attack you and react to the actions of the players, you may notice there is rhyme and reason behind how they approach defenders.

A first important step is being aware of the fact that the M.O.B. will recognize your group’s roles. Although there can be subdivisions within these categories, it can be broadly defined as: Front line, Attackers and Supports. 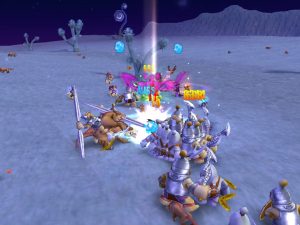 The M.O.B. will approach these roles in specific ways, and if you (or your group) does not keep this in mind, they may find themselves being overrun in a battle that you could otherwise win. On the other hand, proper knowledge of this can help players direct the flow of battle into a much more controllable pace.

FRONT LINE:
These are your "Tanks", they act as the main buffer between the aggro (main attack targets) of the enemy force and the rest of the players. The front line is mostly composed of Soldier job classes such as Knights and Champions. While there are other classes than can act as members of a front line in times of need; pound for pound, these two are the principal components of it. (Some classes that are in the front line are Clerics with blunt weapons, Dealers with launchers and Hawkers with crossbows). In some instances defensive summons can assist with the front line by luring aggressive enemies onto them.

ATTACKERS:
These are the dedicated damage dealers of the group, while their positions behind the front line can vary based on the average range of their abilities, their overall grouping is of course a safe distance behind the tanks. Classes that typically fill these roles are ones such as Mages, Scouts, Raiders, Bourgeois and Champions. While the front line endures the brunt of the enemy’s attack, the attackers (DPS) whittle down the biggest threats of the opposing force. In some instances offensive summons can assist, by moving in with the tanks to fight and grab enemies onto them.

SUPPORTS:
These are the lifeline of the combat force, typically the healers, buffers and de-buffers of the group. They assist the Front line by keeping it strong and healthy while providing the attackers additional sources of damage so they may thin out the enemy’s numbers. With a few exceptions, these are also typically the members in charge of reviving fallen defenders so that small losses do not add up to ultimate defeat. These are primarily Clerics, though sometimes Mages, Artisans, Raiders and Bourgeois can fill in support roles as well.

The flow of battle can be broken down as follows:

Rarely do fights follow the above structure perfectly, but there are several things players can do to recover from unexpected events such as a new enemy tactic or a player mistake. Below are some examples and a suggested course of action:

*This is meant to be an example, different battles will call for different priorities.

Now that roles are a bit more defined, this is the basis of member’s responsibilities during a fight:

Frontline – Hold a line, stay in between the enemy and your allies. Front liners do not want to leave TOO much space between each other, or else enemies may slip through. Keeping an eye on your armor is imperative as you will be taking a LOT of hits and your armor WILL wear down. Dedicated tanks are recommended to carry around more than one set of armor for extended confrontations.

DPS (Attackers) – Take out enemies in order of priority. Melee DPS such as Champions and Raiders help clear out the enemy front line, prioritizing the stronger targets crashing against the tanks. Ranged DPS such as Mages and Scouts deal with enemies such as bow users and spell casters first, switching then to the enemy front line. Long-range attackers such as Artisans take out high priority targets such as enemies who put players to sleep or wear down large threats before they hit their allied front line.

Supports – They keep the front line healthy, revive fallen allies and provide buffs to those who need it. On the topic of buffs, there are details to keep in mind as to which buffs to use and for what purpose; below is an explanation of the battle utility of some common buffs:

A support also must work between priorities, if both a DPS and a member of the front line is in trouble, the priority should go to helping the front liner, ensuring the formation holds. Sometimes players will expect too much out of a support, it is important to know what your priorities are and stick to them, ensuring victory.

Practice makes perfect. Experiment with Front line formations, methods of recovery, ways to adjust to events. Fighting often with the same group of people can also develop a stronger sense of communication between the players; your own battalion is a great place to start! Try things out, see what works and what doesn’t, and learn the tactics your enemies use against you (different factions have different fighting styles, keep that in mind!). Best of luck out there, and may you hold on to your "exp".